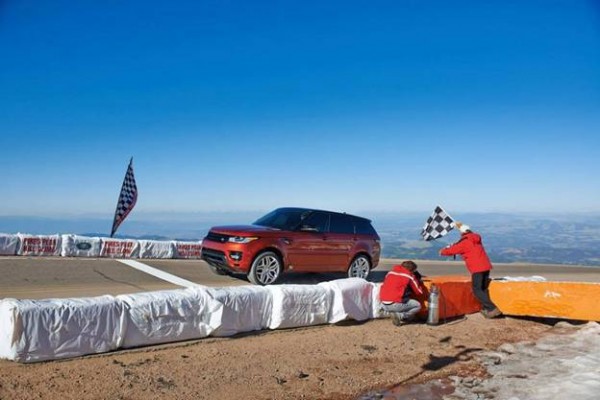 After breaking the Pikes Peak record for production SUVs, the new Range Rover Sport gets another gig at the 91st international hill climb event. The big Brit will be the official pace car of the event, which begins on June 30.  That is if everything goes as planned. Some parts of Colorado are on fire again, and that could cause problems, as it did last year, to the Pikes Peak race.

The Sport proved its worth when it completed the Pikes Peak course in 12 minutes 35.61 seconds with an average speed of 59.17 mph (95.23 kph), in the hands of veteran driver, Paul Dallenbach. The record-breaking car was in factory standard state, except for a roll cage and harness seatbelts to meet racing safety requirements. That is a remarkable performance for a big SUV than can seat up to seven people. It is largely due to the state of the are Supercharged 5 liter V8 engine that makes 510 horsepower and a bucket load of torque, and also because the new Sport, like its bigger brother the Vogue, has a new aluminum structure that is 800 lbs lighter than previous generation.

Dallenbach said, “There’s no margin for error at Pikes Pike – you only need to misjudge one of those 156 turns and you’re into the trees or over the edge of the mountain. To take on this place the way I did today, you need complete confidence in your vehicle, and the Range Rover Sport sure gave me that – it’s fast, responsive and agile. I was able to place the car exactly where I wanted it on the road to keep to the optimum high-speed lines through corners. This is a hugely capable vehicle and I’m proud to have been part of demonstrating that by setting a new Pikes Peak record.”