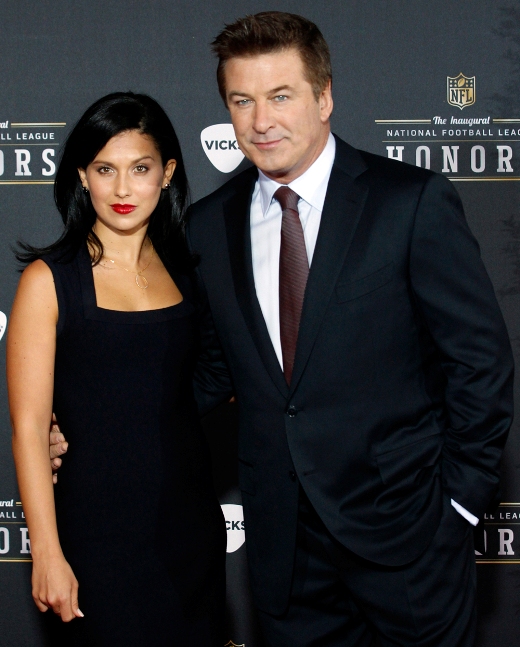 Alec Baldwin and Hilaria Thomas, tied the knot in front of family and friends Saturday at the Basilica of St. Patrick’s Old Cathedral in Manhattan. Matthew Hiltzik, a friend of the couple, announced the happy occasion on Twitter:

“Hilaria Thomas and Alec Baldwin were married this evening…in New York City, sharing the occasion with family and friends inside the Cathedral, and Alec warmly receiving congratulations from well-wishing fans on his way into the service.”

Ireland Baldwin, the groom’s 16-year-old daughter with ex-wife Kim Basinger, was in attendance, along with Jimmy Fallon and SNL and 30 Rock producer Lorne Michaels. Also on hand to celebrate the big day were Tina Fey, Mariska Hargitay, Woody Allen as well as Alec’s brothers Billy and Stephen.

Per People, the bride wore a silk magnolia trumpet Amsale gown with cap sleeves and a keyhole back neckline accented with crystal buttons. The groom donned a tux from Tom Ford.

Befitting the occasion, the venue was decked out with bridal-white roses, hydrangeas and calla lilies. The bridesmaids wore eclectic miss-matched dresses, some in black, gray and turquoise, others in bold turquoise-and-purple tie-dyish prints.

“Running for mayor and being the mayor are two completely different things, and my life is changing,” Baldwin told David Letterman when the Late Show host quizzed him in August about a possible run for mayor of NYC.

“I’m going to do the show for another year, and beyond that, I’ve got a woman in my life, my girlfriend, who is very important to me.”

“Would I rather be handcuffed to the emergency command center in Maspeth during a hurricane, holding down the fort and making sure all the plows are working,” he added, “or would I rather spend some of that 30 Rock money traveling the world with my girlfriend?”

Fans got their first glimpse of Thomas that night, when the camera cut to her waiting in the Late Show green room.

Congratulations to the newlyweds!