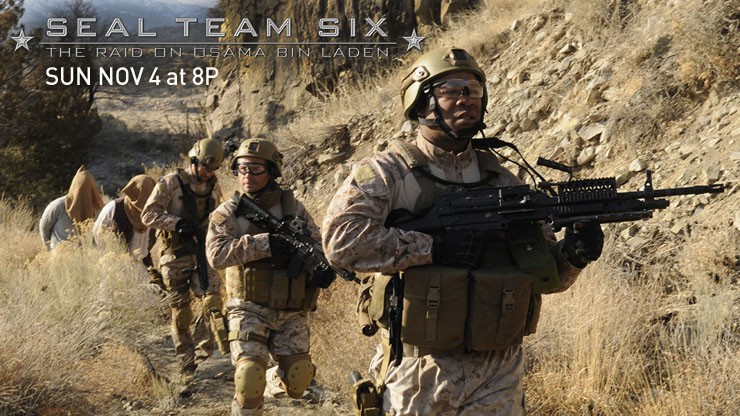 A movie that feels like a documentary at times, a cheesy docudrama at others and some kind of slapped-together film that wants to be taken seriously as well.

The National Geographic Channel may have won the race to be the first to portray the events that led to the killing of Osama Bin Laden – beating Kathryn Bigelow’s Zero Dark Thirty to the big screen by rushing to the small screen on Nov. 4 – but it’s still too soon to say if being the first is the same as being the best.

Nat Geo will air SEAL Team Six: The Raid on Osama Bin Laden on Sunday at 8 p.m. (and has opened in theaters internationally). The film comes from The Weinstein Company and is directed by John Stockwell (Into the Blue, Turistas, Crazy/Beautiful) and produced by Nicolas Chartier, who was a producer on The Hurt Locker, Bigelow’s Academy Award-winning film.

Both SEAL Team Six and Zero Dark Thirty have been pre-emptively called enablers for President Obama, since the killing of Bin Laden was a major coup for him. But SEAL Team Six will come under more scrutiny because it will air two days before the election and then be available the next day on Netflix.

Still, it’s hard to imagine this film (or even the unseen, save for trailers, Zero Dark Thirty), moving the needle on an election. Why? Because everyone in the world knows what happened and how it ended. The whole thing is in the history books. And with the publication of No Easy Day from SEAL member Mark Owen, it’s not like the world lacks for details if they really want to seek them out.

And yet if any Republicans are worried this sneaky little move by Nat Geo and TWC be a knockout blow or even a jab in this upcoming election, they should rest easy. That’s because the film really isn’t that good.

All the compelling parts are precisely as you’d imagine them to be – the intelligence reports that unearthed Bin Laden’s whereabouts in Pakistan, the risk of every attack option, the stark reality that the intel might be wrong and the United States – and by extension Obama – would be embarrassed and finally the nerve-wracking mission itself.

It doesn’t take much of a genius or even a dramatist to understand that those are the core elements. In fact-based dramas, knowing the ending is a real hindrance because there’s no mystery or suspense. When the SEALs enter the compound you know they’re not going to be killed. You know they’re going to get Bin Laden, they’re going to get away, and the near screw-up with one of the two helicopters going down in the compound is not going to ruin everything.

So, where’s the drama? Technically you don’t need any more rama than all of the action listed above – you just need a director and a budget that’s going to make the whole thing pulse-pounding and bad-ass. Parts of SEAL Team Six: The Raid on Osama bin Laden make that happen, but the 90-minute film misses the essential element that it needed (and Bigelow’s film will need): character development. Stockwell’s film resorts to the now-boring conceit of having the participants talk to the camera. This exposition is not only a cheat, cutting corners by telling when it could be showing, but it never lets the audience feel anything for the characters. They are mostly cardboard cutouts.

The problem with that list is that Gigandet is allowed almost no time to show the audience he’s the team leader. Mount steals the better material and only in rare flashes do we learn anything about the others. In fact, there’s so little of Sauce in the film that he’s barely a seasoning. You can’t mine drama from characters you’re not manipulated into liking or loathing.

The person who gets the most mileage out of SEAL Team Six is Kathleen Robertson (Boss) as Vivian Hollins, the CIA analyst who has been hell bent on getting Bin Laden since the Sept. 11 attack on the Twin Towers. There are two problems here. First, all any fan of Homeland, the Showtime series that just swept the Emmys, will think is that Robertson is essentially Claire Danes playing Carrie, the CIA analyst hell bent on bringing down the fictional Abu Nazir after the Sept. 11 attacks. Robertson, who does great work on Boss, isn’t given anything remotely interesting for her character – like Carrie’s mental issues and her love of jazz – and instead gets the most clichéd, rote dialogue to read as she talks to the camera in those faux interviews.

Eddie Kay Thomas and William Fichtner are in this movie as well, but they are also ghosts who leave little memory for the viewer.

That’s not to say that some of the combat scenes in SEAL Team Six are not riveting, as is the aforementioned final days and minutes leading up to the raid on Bin Laden’s compound. But with almost no emotional interest in these undeveloped characters, the movie feels more like it was tossed together in an effort to be first on any screen – small or large.

SEAL Team Six is interspersed with photos and interviews of Obama and the players around him during that difficult decision process, and if you’re really into that sort of thing you could spot one or two moments that certainly looked like political ads. A photo of Obama mulling over something enormous certainly gives him gravitas and there’s more than a few shots with American flags after the news of Bin Laden’s death.

But this is a movie that feels like a documentary at times, a cheesy docudrama at others and some kind of slapped together film that wants to be taken seriously as well. Whatever you may think of how it was sewn together, SEAL Team Six isn’t particularly bad, it’s just not particularly good or interesting.

The latter isn’t particularly convincing and the former brings up interesting questions about the process that might have made for fantastic dramatic scenes. Unfortunately, they’re not in the movie. For example, here’s something Stockwell writes in his statement: “What if bin Laden had fled the compound when he heard the approaching choppers? Would we have pursued him through the streets of Abbottabad? What if the Pakistan military had shot down one of our helicopters; engaged in a firefight with our troops and took hostages; or used fighter jets? There were also suspicions that the house was rigged to explode or that the occupants had a cache of Stinger missiles and the enclosed rooftop patio was the perfect launching pad to take down the vulnerable hovering Blackhawks. What if large numbers of the women and children in the compound had been injured or killed? What if there had been Americancasualties? And the most potentially disastrous outcome – what if any of the above had happened, and the intended target of the raid wasn’t even there?”