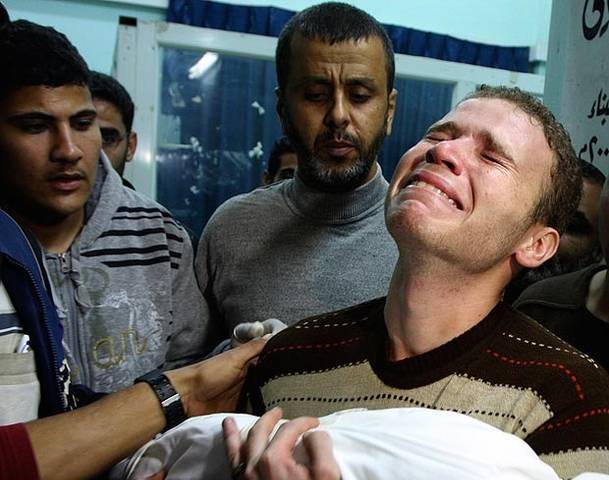 The death toll from Israel’s aerial attacks on Gaza Strip has risen to at least 45 Palestinians, while 345 others have been wounded, including 107 children and 64 women, as the Israeli army’s offensive entered its fourth day, medical sources in Gaza said.
In an attack on Saturday morning, Israeli air jets F-16 fired six heavy rockets at Hamas government headquarters in Gaza City. Palestinian sources said the four-story building was completely destroyed. The building housed Hamas Prime Minister Ismail Haniyeh’s office. According to an Arab news website, the government headquarters was targeted by four strikes. The building, located in Nasser neighborhood in Gaza City, is completely destroyed and was empty at the time of the attack, according to witnesses and Hamas officials. Neighboring houses were also damaged by the barbaric bombing, Hamas official said.

Following the attack Haniyeh tweeted: “The Zionists gangs believe their attack will weaken us, but the opposite is true. It only strengthens our determination to liberate Palestine and increase deterrence in the face of the Zionist settler until we achieve victory, God willing.”

Meanwhile, the barbaric raids on Gaza Strip continued and targeted several places in Gaza, including the main building of the Palestinian police in the Rimal neighborhood, which was completely destroyed, after raids by several military aircraft. As for the northern Gaza Strip and specifically in Jabalya Nazla area, an Israeli strike targeted the house of Hamas activist, Ibrahim Salah. According to a spokesman for the Gaza emergency services, Adham Abu Selmiya, 30 civilians, mostly women and children, suffered different injuries in the attack.

In another fresh incident on Saturday morning, Israeli warplanes fired five missiles at the international stadium of Palestine west of Gaza city, inflicting considerable damage, on its southern side. In response to the Israeli continous attacks, more than 80 rockets fired from the Gaza Strip to different Israeli settlements and cites included according to resistance groups, Ashkelon, Sderot settlement, Ashdod, Beersheva, Eshkol, Hatzerim air base, Tselm military base, Re’eim military base and Tel Aviv.

According to Hamas information office, the Al-Qassam Brigades said in Gaza that it launched a long-range Fajr-5 rocket at the city of Tel Aviv. Israel Radio said a cloud of smoke was seen in the sky over the southern outskirts of Tel Aviv, Israel’s commercial centre. Israeli police spokesman Mickey Rosenfeld said, two rockets were fired from Gaza into the city, and one had been intercepted by Israel’s Iron Drone missile defense system.

“Police units searched several neighborhoods, in Tel Aviv and there is no indication the rockets landed, and no reports of injuries or damage,” Mickey Rosenfeld said. Witnesses saw two white plumes of smoke, the interceptor missiles, rise into the sky over the southern outskirts of Tel Aviv and heard an explosion when the rocket was hit.

It is worth mentioning that the Israeli army still refrains from announcing the real number of casualties in its ranks, caused by these resistance counter-attacks, and claimed on Saturday that only one soldier sustained moderate injuries, in a rocket attack on Ashdod city. Israeli sources said four Israeli settlers were killed in Ashdod and Beersheva, in addition to four soldiers who sustained injuries as Hamas fired four rockets dubbed “107” at the Israeli artillery post to the east of the Bureij refugee camp Saturday morning in central Gaza.

Moreover, the Israeli army claimed that army has hit more than 200 targets overnight, including 120 rocket launchers and 20 tunnels, bringing the total number of targets throughout the operation to 830. In the Egyptian Sinai, according to MENA news, an Egyptian security source said Egyptian forces witnessed militants fire three rockets into Israel, on Friday evening, from al-Ajrah desert area south of Rafah city. The source also said Egyptian security forces cannot reach al-Ajrah because it is controlled by Jihadist groups and Salafist militants.

There was no comment issued by the Israeli army on this event, but according to Israeli Channel Ten, army source confirmed the news but declined to declare any injuries.