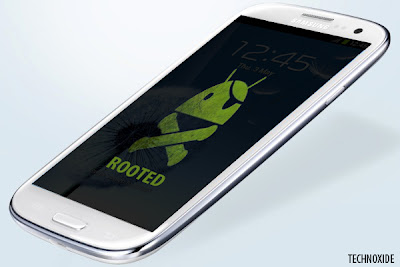 Everyone hates the bloatware that clogs up most network-locked phones, apps you neither want or need, but can’t delete because they’re baked into the OS. With a rooted phone, you can get rid of them fast. A rooted phone also lets you install custom community versions of Android called ROMs, which can bring all kinds of benefits — zero bloatware, smaller size, faster performance and a newer Android version not yet available from your phone provider. I’ll show you that how to root a phone  e.g Samsung Galaxy S3.

You can take it to the bank that rooting your phone will void your warranty. Although the odds are small, rooting gone wrong could damage your phone beyond repair (brick it). That said, some of the most popular phones are already at much greater risk of bricking themselves before you start doing anything remotely funky.

There are ROMs available for every phone, so it’s important you select a ROM that’s designed for your specific model. We can’t stress this enough. For example, ‘Galaxy S2’ is the generic name for up to five different models: the GT-I9100, GT-I9100G, GT-I777, SGH-T989 Hercules and Skyrocket. If you have a GT-I9100 (it’s shown on the Samsung splash screen when you boot up), you can’t use a ROM meant for the GT-I9100G because they’re not the same phone under the bonnet.

Back Up Before You Flash

You also need to back up your phone before you flash a new ROM. Flashing ROMs requires your phone’s flash storage to be wiped, so you need to back up everything — files, apps, contacts, SMSs, emails, the whole shebang — as they won’t be there when you launch your new ROM.

And most importantly, don’t leave your backups on the phone storage — copy them to your computer.

Meanwhile, the Galaxy S3 has a different fault, ominously called the Sudden Death bug, but it’s related to the eMMC chip bug issue in the S2. You can use the eMMC Brickbug Check app to see if you have the problem eMMC chip. Basically, if you have the 16GB version of the S3, you’re running Android 4.1.1 or older and the VTU00M eMMC chip with 0xF1 firmware revision (FWrev), you’re ripe for a hit of Sudden Death.

The fault is in the eMMC chip’s firmware, which causes it to just suddenly die. It’s also said to affect some early first-generation Note II phones that use the same eMMC chip. The internet is littered with forums covering this, but the Whirlpool thread at forums.whirlpool.net.au/archive/2030080 is probably most relevant to Australian users. So far, more than 60 Whirlpool users have detailed their Galaxy S3 Sudden Death experiences.

The official fix appears in the 4.1.2 updates that have been pushed out by telcos since mid-January this year, so if you haven’t done so, make sure you download and install the update as soon as possible if your phone has all the Sudden Death factors. It also means you must stick to 4.1.2 or later Android versions to remain safe. Drop back to 4.1.1 or earlier and your phone is susceptible again.

Google has been pretty vocal of late in the face of security software vendors claiming Android is a security risk. However, Samsung Galaxy owners have special reason to be concerned through a bug relating to Samsung’s Exynos processor. It was discovered in mid-December 2012 that the Exynos memory module gives full read and write access to physical memory and offers the potential of numerous attack vectors for unscrupulous hackers. The bug covers a range of Samsung devices using the Exynos 4 processor including the Galaxy S2, S3, Note, Note II, the Galaxy Camera and Note 10.1.

To its credit, Samsung plugged up the hole in early January this year, so if you haven’t already, make sure your firmware is up to date. Although reports are that XXELLA firmware is required to patch Galaxy S3 phones, the latest firmware available from Australian telcos at the time of writing was the older XXELL2. However, we were able to test it with the ExynosAbuse-1.40.apk app from XDA Developers and the problem appears to have been fixed with this firmware release as well.

Until it was fixed, the Exynos memory bug provided an easy way to root your Galaxy device. However, it can still be done and the simplest way is using Samsung’s ODIN phone flash tool and XDA Developer Chainfire’s CF-Auto-Root package.

The most important thing about CF-Auto-Root is you need to grab the right version for your phone — as we mentioned earlier, use the wrong one and it could spell disaster. You can download the files from autoroot.chainfire.eu. However, unlike most rooting tools, it aims to leave your phone as close to stock as possible. Note that this may increment the S3 flash counter, which counts how many unofficial firmwares have been installed, in case of warranty claims. Triangle Away from Google Play ($2.49) should be able to fix that.

Installing a New ROM on your Galaxy S3

If all you want to do is to root your Galaxy S3, our rooting step-by-step guide below is all you need. However, if you want to install a new ROM, there’s more you need to do. First, back up your contacts, calendar, SMS, call log and so on, just as we described with the Galaxy S2. MyBackup Root is your best bet here, followed by Titanium Backup for your apps. Again, we wouldn’t recommend trying to copy your apps across to a new ROM — it’ll end in tears. Install them from scratch.

Warning: Any flashing of your smartphone will void your warranty. We are not responsible for any damage done to your phone while rooting.