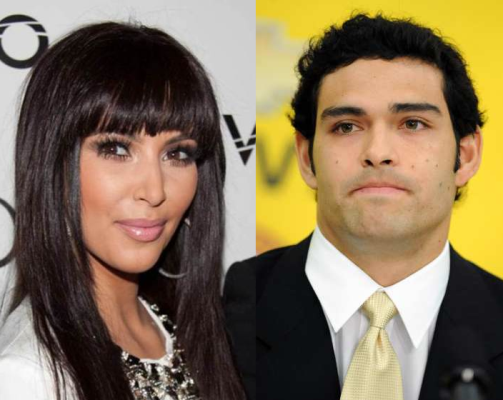 An insider spilled to a magazine, saying that the couple took time out of their busy schedules to hang out whenever they were in the same state. “Kim and Mark like to meet in hotels for dinner dates and flings. Whenever Kim is in New York, they hang out,” the source added. “They are very careful with not being seen together, Mark is seeing someone! She has her hopes set on a bigger star than Sanchez. But for now, he’ll do.”

The source quoted by the sports blog also claimed that Kim Kardashian and Mark Sanchez were planning a “super secret rendezvous” for the upcoming Super Bowl weekend. Ever since reality TV diva Kim Kardashian split from her husband of 72 days, NBA star Kris Humphries, after their highly-publicized, fairytale wedding, she has been linked to many celebrities. Among her recent alleged dating partners are her ex-beau, Miami Dolphins running back Reggie BushReggie Bush, and Denver Broncos quarterback Tim Tebow.

Apparently, the foxy brunette beauty has a weakness for professional football players, as she also dated Dallas Cowboys wide receiver Miles AustinMiles Austin for a summer and her latest boyfriend is, of course, 25-year-old New York Jets quarterback Mark Sanchez. The latter is currently dating model Kate Upton as well. Kim Kardashian, however, denied the rumors, saying, “I swear I’m not dating [Mark Sanchez] at all. Honestly, I’m a huge Jets fan and became very good friends with him and his buddies. There’s genuinely, absolutely nothing going on. I’ve always been that girl who has a lot of dude friends. I’m into sports so we have a lot in common, but not, definitely 100% not dating.”

Since her denial didn’t put an end to the rumors, Kim Kardashian took to Twitter to pour cold water on the reports of her seeing Mark Sanchez. “Dating rumors are always fun when u don’t even know the people your supposedly linked to! Who makes this stuff up!” the curvy 31-year-old actress tweeted Friday.