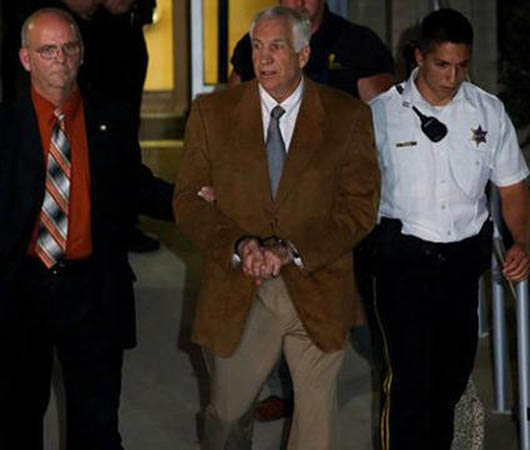 Crowds gathered outside the Centre County courthouse in Pennsylvania erupted in cheers as they learned of the verdict around 10 p.m. EDT on Friday. This guilty verdict would put the ex-Penn State coach/Second Mile mentor behind bars until death; the guilty charges carry a maximum sentence of more than 400 years.

According to the live CNN broadcast, Sandusky’s wife Dottie started blinking rapidly as the verdict was read in court. Defense lawyer Joe Amendola reportedly didn’t have much faith in his client’s innocence, for earlier today he jokingly said that he would have a heart attack if Sandusky wasn’t found guilty on at least some of the charges.

Many have accused Amendola of putting on an incompetent defense, and his strategy of using an obscure mental condition called Histrionic Personality Disorder to excuse Sandusky’s love of and behavior around children, one of his myriad mistakes and blunders.

The former Penn State football coach was arrested Nov. 5, 2011, after a two-year investigation into 15 years of molestation of 10 boys from his charity Second Mile. Sandusky had pleaded not guilty. The fallout from this shocking scandal was far-reaching, and the late, legendary coach Joe Paterno was never charged but was fired, along with the university chair. Two Penn State officials were charged for not reporting the abuse.

In a shocking development, his 33-year-old adopted son Matt Sandusky revealed through his lawyer on Thursday that he too was sexually abused by his father.

Eight of his accusers delivered disturbing, riveting testimony against their mentor, with all giving similar stories of being groomed for sex when there were boys of 10 to 15 years old. They told of being raped and molested in the basement of Sandusky’s home, even with his wife Dottie Sandusky at home. One victim, who said he was abused over 150 times every weekend for three years, starting at age 12, told of screaming for help with no one coming to the rescue.

Penn State assistant coach Mike McQueary, one of the prosecution’s key witness, also testified of seeing his fellow coach having sex with a small boy in the shower of the university in 2001. Another victim told of also showering with Sandusky but not remembering what happened after blacking out when he was lifted high by his mentor to be washed off.

Sandusky started the non-profit Second Mile for at risk kids in 1977, and many say this was a ruse to prey on an unlimited amount of vulnerable boys.

Speaking after the verdict, defense attorney Amendola said in a press conference that Sandusky’s family was “obviously disappointed” but that they respected the verdict. He added that judge Cleland and the prosecution did an exemplary job during the trial but that he will appeal the guilty charges. On the question of why his client did not take the stand, he answered that the state was planning on using his son Matt against him and that would have opened up Sandusky to a detrimental line of questioning.

Amendola said that he and the Sandusky family were shocked when Matt turned on his father and planned on testifying for the prosecution, for he had originally agreed to take the stand on his father’s behalf.

Attorney General Linda Kelly held a press conference soon after Amendola, where she introduced all who worked on the case and thanked them for toiling tirelessly to bring a “serial child predator” to justice. She also commended the victims for their bravery in coming forward and reliving their pain in public. Kelly said she hoped this case would help other victims come forward–who would not be deterred by the notion that “no one would believe a kid,” something Sandusky said to intimidate those he abused and prevent them from telling anyone.

Kelly called the former Penn State coach “a monster” and said that we all needed to do better in protecting the innocent among us.