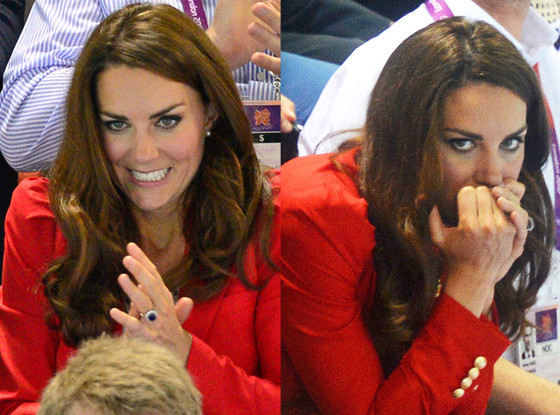 Ryan Lochte, Gabby Douglas and Tom Daley’s abs are the real stars of the, but we’ve been keeping our eyes out for another set of famous faces: Kate Middleton and Prince William! The royal duo have been hitting the stands in London to cheer on their countrymen and -women, making pit stops at equestrian events, rowing and tennis (where the dashing duo got into the spirit and performed the wave).

The Duchess of Cambridge arrived at Olympic Park solo and sat with Prime Minister David Cameron and Olympic champion Sally Gunnell early in the day to watch Britain’s Jessica Ennis compete in the 100-meter hurdles.

And Kate might have been Jessica’s Lady Luck, because the runner set a new world record for her event!

Afterwards, Kate—donning the Team Britain jacket she’s been sporting for most of the Games so far—headed to the field hockey arena to watch the Great Britain team take on Pakistan. And all her cheering paid off again, as G.B. won the match.

Finally, Kate met up with her husband—after an outfit change, naturally—to cheer on Becky Adlington in the 800-meter freestyle. The Duchess, wearing a chic red jacket and polka-dot top, got in on the excitement of the close race, seemingly biting her nails with nerves.

Adlington ended up scoring a bronze medal, but we think Kate takes home the gold today for being G.B.’s top fan!