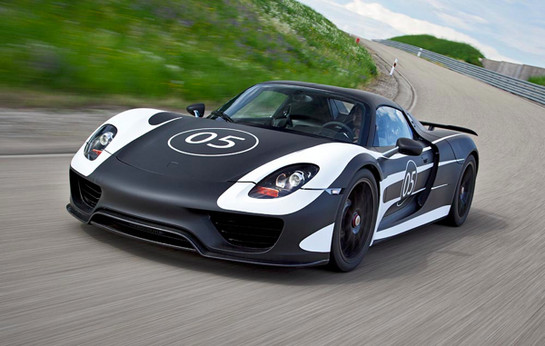 Usually car makers prefer to keep their new cars secret until they’re fully ready. But Porsche likes to keep us informed about the development of 918 Spyder. This futuristic hyper car is too significant to remain a mystery. So after some heavy track testing at Nardo, Porshce is now ready to take the first prototypes to the road. This time it’s wearing its own body, but features a unique camouflage reminiscent of old Porsche 917 racing cars.

For those of you who forgot, the 918 – the spiritual successor to the Carrera GT – is a hybrid super car with a petrol engine in the middle and two electric motors to back it up – one on the front axle and one in the drive line, acting on the rear wheels. Together they make more than 770 hp, which is fantastic, but it’s not the most astonishing fact about this car.

That’d be the fuel consumption which is estimated to be in the region of three litres per 100 kilometres. The 918 boasts a carbon fiber body which, although not as magnificent as the Carrera GT, looks pretty interesting.