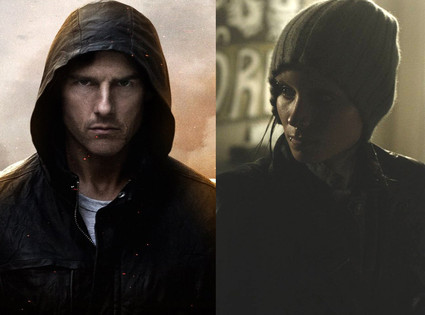 The latest flick in the MI franchise topped this weekend’s box office with $26.5 million, cruising up from its number three spot last weekend in limited release. The Tom Cruise/Jeremy Renner vehicle easily defeated the likes of Sherlock Holmes: A Game of Shadows, Alvin and the Chipmunks: Chipwrecked and, perhaps most surprisingly, The Girl With the Dragon Tattoo.

What may have been a bit surprising, however, are the figures from the highly anticipated Girl With the Dragon Tattoo, which debuted at number four with $13 million.

Don’t count the gritty crime thriller out just yet though.

Its box office rank could change significantly in the upcoming week, considering that its dark themes don’t exactly make it a traditional feel-good holiday movie option (though it got a good start when it opened with $5.1 million just days ago).

But The Girl With the Dragon Tattoo wasn’t the only flick that debuted below solid holdovers like Sherlock Holmes and Alvin and the Chipmunks (which were both released Dec. 16).

Family oriented flicks The Adventures of Tintin and We Bought a Zoo didn’t put much of a dent in the box office gross either, nabbing only $9.1 million and $7.8 million, respectively.

Steven Spielberg‘s much-hyped Tintin did make a comeback from its lackluster Wednesday debut, however, considering it only snapped up $2.3 million on that opening day.

Check out the weekend’s top movies, according to Boxofficemojo.com.

3. Alvin and the Chipmunks: Chipwrecked, $13.3 million

4. The Girl with the Dragon Tattoo, $13 million