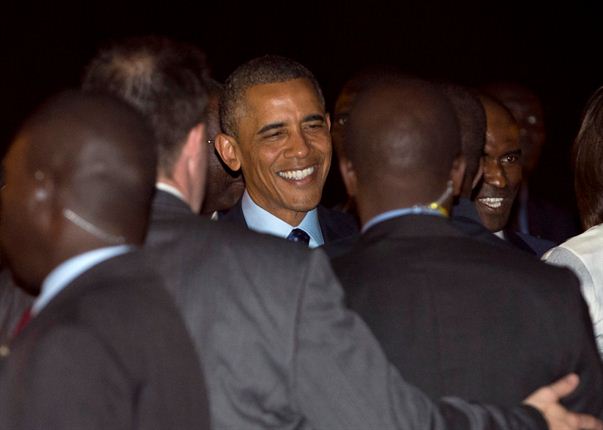 President Barack Obama began his weeklong trip to three African countries on Wednesday after African leaders showed disappointment over the lack of interest shown by the first black president of the United States. The president is traveling alongside First Lady Michelle Obama and their two daughters, Malia and Sasha. His plane landed in Senegal’s capital, Dakar, Wednesday evening, and after spending some time in Senegal, he is scheduled to visit South Africa and Tanzania.

Despite his roots originating from Kenya, with several of the relatives on his father’s side living in the country, Obama spent just one day in Africa during his visit to the continent during his first term. His first term was focused more on strengthening ties with Latin America and Asia and resolving the Arab Spring.

Even now as Obama makes a weeklong trip to Africa, only a few major policy announcements are likely to be made. Obama’s stated goals for this trip remain promotion of the region’s democratic institutions, enhancing opportunities for African youth and promoting the countries as emerging markets for trade.

“Presidential trips to regions of the world like Africa bring enormous benefits in terms of our relationship with the countries visited and the countries in the region,” spokesman Jay Carney told reporters traveling with Obama on Air Force One, trying to defend the purpose of the trip. “The trip itself will not be the end point of our engagement, but will enhance it, deepen it and further it.” The trip will nonetheless remain overshadowed with the health woes of the much-loved South African president, Nelson Mandela. While there are no plans for Mandela and Obama to meet personally, there is a possibility that Obama will pay a visit to the family of the ailing leader.

“Ultimately, we want whatever is in the best interest of his health and the peace of mind of the Mandela family,” said Ben Rhodes, Obama’s deputy national security adviser.

According to the World Bank, six of the world’s 10 fastest-growing economies are in Africa. White House economic advisers traveling with Obama believe the trip will boost economic ties between America and Africa.

During his trip, Obama is also scheduled to make stops at Senegal’s Gorée Island, former center of Atlantic slave trade, and the apartheid-era prison in South Africa where Mandela spent 18 of his 27 years in prison.