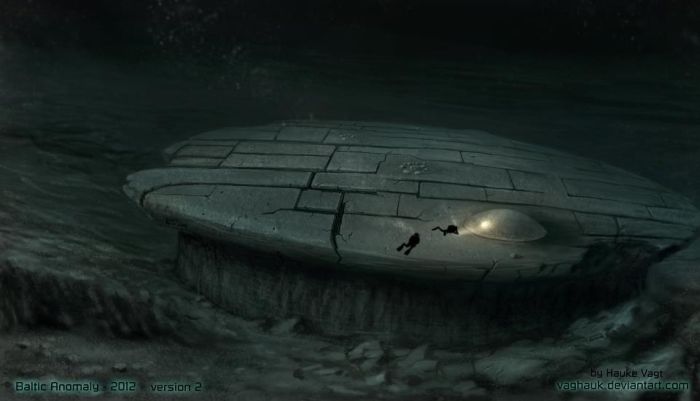 The object, which appears like an enormous mushroom rising 3-4 meters/10-13 feet from the seabed, is made from a hard rock like substance, possibly sandstone or concrete, with rounded sides and rugged edges. At the top there is an egg shaped opening, and small soot-covered stones appear to have been placed on top of it in the shape of small fireplaces. Passageways or walls and something that could be a staircase are seen at a 90 degree angle from the top of the sphere.

“During my 20-year diving career, including 6,000 dives, I have never seen anything like this. Normally stones don’t burn. I can’t explain what we saw, and I went down there to answer questions, but I came up with even more questions,” said Stefan Hogeborn, one of the divers at Ocean X Team. The path to the object itself can be described as a runway or a downhill path that is flattened at the seabed with the object at the end of it, according a news release posted on the Ocean X website.

“First we thought this was only stone, but this is something else. And since no volcanic activity has ever been reported in the Baltic Sea the find becomes even stranger. As laymen we can only speculate how this is made by nature, but this is the strangest thing I have ever experienced as a professional diver,” continues Peter Lindberg, one of the founder Ocean X Team.

“Right now, scientists are examining samples from the circle-shaped object, and experts in sonar imaging are processing data from the ship to hopefully shed more light over the mysterious object,” the news relase reports. Members of the underwater team were completely dwarfed by the enormous object, which divers attempted to photograph, with some difficulty. Strange anomalies occured when electronic equipment came into close proximity to the object. A shipboard dive computer first registered the water temperature at the object’s level at minus one degree, which would not be possible as the water would be frozen. Further strange phenomenon occured once the team was underwater – the camera stopped working when they approached the object.

A satellite on the ship stopped working when they stopped over the object, resumed working once they were 200 metres away from it, then stopped working again as soon as they were situated over top of it again. This mysterious interference with equipment could indicate some type of energy emitting from the sunken object.

In two weeks the next expedition of the Ocean X Team will return to the site in order to complete further tests, this time with a geologist-specialist on board. Samples taken from the object have been sent for scientific analysis. The team is 100 percent convinced and confident that they have discovered something very, very unique.