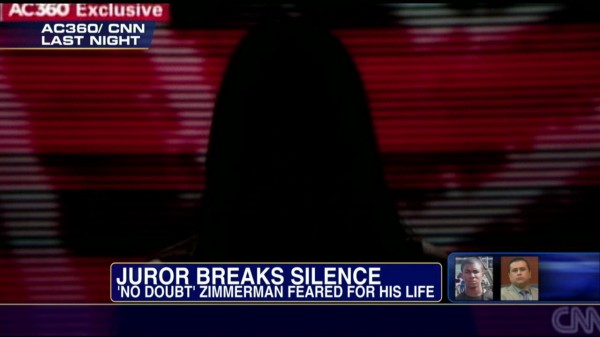 The George Zimmerman Verdict, which sparked protests across the country, has become an excuse to “vandalize the city,” ABC News reported. Protestors ramped up the violence overnight on the streets of Oakland, which led hundreds of people to start smashing windows, setting fires in garbage cans and on the streets, attacking police officers and the louting of a nearby Walmart.

“Officers have reported rocks and bottles being thrown at them and we are affecting arrests,” said Oakland police representative Johnna Watson. Ultimately, 20 people were arrested, but there may be more in the days to come. Meanwhile, CNN’s Anderson Cooper landed the first interview with a Zimmerman juror under complete anonymity Monday night. Judge Debra Nelson announced in June the names of jurors would be kept confidential for an undisclosed period of time, but Zimmerman’s attorneys have requested at least six months, because the jurors fear for their safety.

Cooper’s interview came surprisingly fast during escalating protests from Seattle to Washington, D.C., calling for “justice for Trayvon Martin.” Juror B37 sat across the desk for Cooper, with her face blacked out, and gave an emotional 30-minute description of her jury ordeal. She said the jury of six women ultimately didn’t believe that race was a factor in the tragedy, which infuriated many Martin family supporters, who are convinced it was all based on Zimmerman’s racial profiling of the subject he saw on the street that night.

However, juror B37 didn’t see it that way, because she didn’t feel it would have made a difference to George what the skin color was if that person put him in the same belief that he was fighting for his life. “I think George Zimmerman is a man whose heart was in the right place, but just got displaced by the vandalism in the neighborhoods, and wanting to catch these people so badly, that he went above and beyond what he really should have done,” said the juror, as quoted in the New York Daily News.

B37 said most of the jurors wanted to find Zimmerman guilty of something, but there wasn’t enough proof to convict him on the two options they had; second-degree murder or manslaughter, when considering the “stand your ground” law of Florida. She had “no doubt” in her mind about it. But the initial split was one juror for second-degree murder, two for manslaughter and three for not guilty.

At one point, the jury requested clarification on the manslaughter charges, which seemed confusing to them, but ultimately the jury came back with a unanimous decision of not guilty. Furthermore, B37 told Cooper she “was sure” the voice she heard on the 911 tape was George Zimmerman and that belief was shared by all the jurors, except one. Also, the fact that it was Trayvon Martin, who sucker punched Zimmerman in the face, which started the physical altercation, could not be ignored.

“I feel sorry for both of them,” said B37. “I feel sorry for Trayvon, in the situation he was in. And I feel sorry for George because of the situation he got himself in.” Attorney General Eric Holder spoke at the NAACP conference in Orlando Tuesday evening, which was aired live on CNN. Holder said he agrees with President Barack Obama that America is a nation of laws and the jury has spoken. But he also said he was concerned about the case and claimed the ongoing investigation that was started last year will continue. They will consider all information in the case, but there will be no rush to judgment.

Holder said that most protests have been peaceful, but the ones that weren’t “don’t honor Trayvon.” It is an opportunity for the nation to address the racial divide that remains in this country, with respectful and responsible dialog, he explained. Laws that contribute to more crime than they prevent will be getting a hard look from his department. This comment brought a lot of applause from the audience, since Florida has the notorious “stand your ground” law that was used as a successful defense in the Zimmerman trail.

Regardless, legal experts say they are skeptical the administration will bring a civil rights case, reports The Hill, due to the difficulty to prove race as a motivation for Zimmerman’s actions, but Holder will continue to be put under pressure to act on the issue.

“They will have to do some pretty tortuous legal reasoning to get to a point where they can bring a case here,” said Mark Corallo, former public affairs director for the DOJ. “Mr. Zimmerman was acquitted. There was very little evidence brought forward in the case that pointed to any racial motive whatsoever. I don’t think they’re going to want to go there.” Currently, the unknown jurors are being threatened via social media, with messages saying they should “go home and kill themselves” and calling the women things like racist “klan” members. Such comments are are far more common than people agreeing they did their job and the country should get over it and move on. Apparently, the jurors were isolated and completely unaware of the national tension that was building for days around the case. The remainder of Anderson Cooper’s exclusive interview with B37 will be aired on his show tonight, according to Wolf Blitzer on CNN.