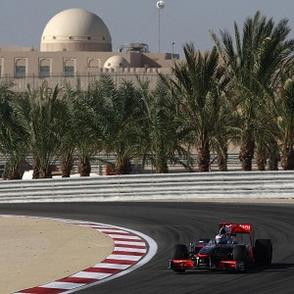 Bahrain’s opposition on Saturday reported the first death in protests timed for this weekend’s controversial Grand Prix as the kingdom imposed a security lock-down around the Sakhir Formula One racing circuit.

It charged that “security forces killed him one day before the final round of the F1 races hosted by Bahrain,” without saying how he died. In a statement, the interior ministry confirmed that “the body of a deceased person was found in Shakhura today” and said it had “a wound to his left side.”

It added that police have begun an investigation” into the death, which was being considered murder. “The government condemns all acts of violence and will ensure the perpetrators of this crime, whoever they may be, will be brought to justice,” the ministry quoted Public Security Chief Major General Tariq al-Hassan as saying. One of Saleh’s relatives told that Habib “was taking part in the protest in Shakhura on Friday and was arrested by security forces while other protesters managed to flee.” The family member said there had been no word of him after the protest “until we were told that his body was found today morning.”

Witnesses told security forces fired tear gas and sound bombs to disperse dozens of people who gathered in the area where Habib’s body was found. Dozens of armoured vehicles were deployed today on roads leading to the circuit, where tomorrow’s race is going ahead despite calls by rights groups to cancel the event because of rising political tensions in Bahrain.

Security gates were set up and bags thoroughly searched at entrances to the circuit.

Activists said a protest was planned for later on today at the Shiite village of Darraz, 10 kilometres north of Sakhir, followed by a march towards the track.

The clashes followed a massive afternoon demonstration in the Shiite suburb of Budaya, west of Manama.

Officials insisted the event was safe, although Force India team withdrew from Friday afternoon practice on safety grounds; two days after four of its mechanics were caught up in traffic near an exploding petrol bomb.

In 2011 the Bahrain Grand Prix was cancelled due to unrest, which cost the country an estimated $480 million to $800 million of investment that would have come from hosting it.