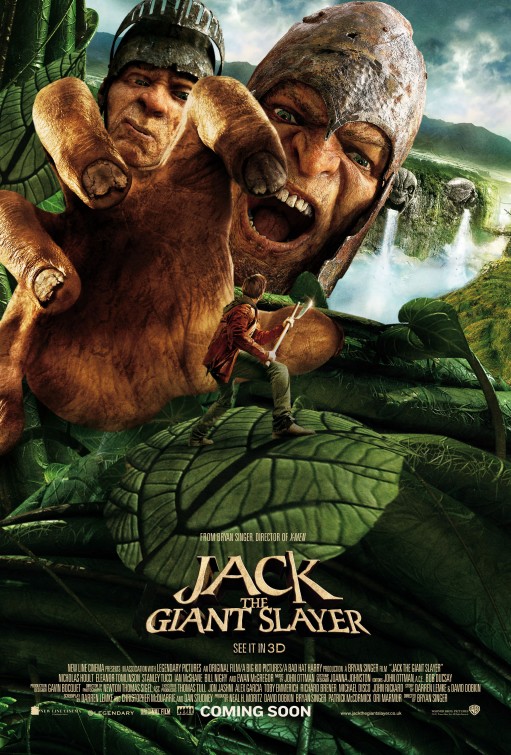 Film Review – Jack the Giant Slayer: It’s well made, attractively cast and has some lively as well as ghoulish moments. But a castle fit for a king to anyone who can find an original or singular element to this handsome reupholstering of the English folk tale, a version notable for its fine visual effects and vastly multiplied population of giants. Postponed from its original summer 2012 opening date, this Warner Bros. release, with just a week to itself before Oz flies up against it, looks to perform reasonably well

Even though the script by Darren Lemke (co-writer of Shrek Forever After), Christopher McQuarrie and Dan Studney (Reefer Madness: The Movie Musical) elaborates enormously on the Jack and the Beanstalk tale that inspired it, all the elements here remain familiar: The poor commoner who makes his mark among the royals, the princess anxious for a taste of life outside the castle, an ancient enemy unleashed after many dormant years, the royal aide-de-camp with treacherous intent, a king worthy of his throne and beastly ogres with bad table manners and no regard for hygiene. It’s the same old recipe, nicely prepared under Bryan Singer‘s direction, but awfully familiar. Princess Isabelle (Eleanor Tomlinson), who’s already pledged to the foppishly sinister nobleman Roderick (Stanley Tucci, in wild hair and whiskers that make him resemble Tim Burton), yearns for a way out of this engagement as well as to experience “an adventure of my own.” She might get both prayers answered by the inadvertent arrival in her life of laddishly handsome 18-year-old Jack (Nicholas Hoult), an orphan farm boy who first intervenes on her behalf during a public altercation and then, more crucially, when she gets sent skyward atop an enormous, twisty stalk that instantaneously sprouts from an errantly planted special bean.

To rescue Isabelle from her peril on this vegetable Tower of Babel and return her to her proper realm in a Camelot-like castle called Cloister, the boldest knights spring into action, led by the imperturbable Elmont (Ewan McGregor) and Roderick. Jack is allowed to join in on the perilous climb through mists and clouds to a land that, marked as it is by the presence of menacing rock statuary and outsized creatures, bears an unavoidable resemblance to King Kong‘s Skull Island.

Residing there is not just one giant but a whole tribe of them, seemingly males only perhaps 40 or 50 feet tale who snack on the first humans they see and have been waiting donkey’s years for the chance at revenge for having been driven off Earth in their last encounter. They’re all loathsome beings who look like cousins to the trio of hungry trolls in The Hobbit: An Unexpected Journey and are led by a general (an essentially unrecognizable Bill Nighy) who has the distinctive advantage of having his own built-in yes-man in the form of a second, somewhat smaller head on his shoulder (John Kassir).

While Roderick pulls his mischief on the side, the rescue party tries to pry Isabelle away from the giants but sees its numbers rapidly diminish in the process. But just when you think things might be heading for an early happy ending with the remaining human’s spectacular escape from the giants’ celestial habitat and the collapse of the stalks, the big guys manage an invasion of their own that sets the stage for a colossal final battle in hyper-medieval style, complete with a moat, boiling oil and very large objects indeed launched through the air.

The easy-to-look-at Hoult and Tomlinson match up well and acquit themselves handily, as do stalwart pros Tucci, McGregor and Ian McShane, the latter for once not playing a villain but the concerned king. The 3D is approached discreetly, almost even as an afterthought, so inconspicuous are the effects. Production values are stellar, including Gavin Bocquet’s production design and Joanna Johnston’s costumes (even if Hoult’s pants and hoodie could pass as contemporary clothing) and the contributions of usual Singer collaborators Newton Thomas Sigel on camera and John Ottman as composer and co-editor (with Bob Ducsay).Opens: March 1 (Warner Bros.)