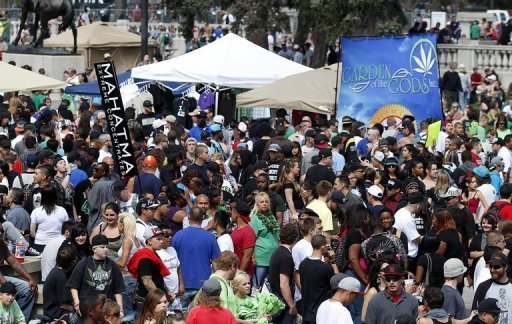 VANCOUVER, Canada — Marijuana fans held mass rallies and pot parties in Canada and the United States on Friday, easing into the weekend with an annual celebration devoted to the feel-good weed.

Canada’s biggest city Vancouver closed a major road in the financial district for the day-long demonstration, in which attendees are urged to light up, while the sweet-smelling smoke also wafted heavily over California.

Organizers predicted a Vancouver crowd of as many as 20,000, compared to police estimates of 4,000 attendees in 2011. “We’re expecting a healthy-sized crowd,” police Constable Lindsey Houghton told Agence France-Presse.

Called “420″ after a nickname for marijuana — hence the April 20 date — the event has murky beginnings.

It reportedly began decades ago at a California high school where a group of students lit joints at 4:20 p.m., when classes ended. The event has spread throughout North America and around the world.

For more than a decade this Pacific port city has tackled illegal drugs as a health instead of a criminal issue, bucking North America’s so-called War on Drugs.

Meanwhile, it has become a global center of the annual April 20 celebration of marijuana.
Most local activists for marijuana decriminalization or legalization say the herb should be regulated and minors should not smoke pot.

Drug researcher Tim Stockwell, director of the Centre for Addictions Research of British Columbia at the University of Victoria, said much scientific research supports legalization, or at least decriminalization for health and social reasons.

In Australian, American and European jurisdictions where laws have been relaxed, the sky has not fallen,” he noted.

“It’s not a completely benign substance but on a scale of harm it rates below alcohol and tobacco as well as cocaine and heroin.”

All these events took place even as antidrug campaigners, Los Angeles drug rehab centers and other treatment centers in the state continue to convince drug users to seek treatment.

“It’s the holidays for people who love marijuana,” said Dave Brian, editor of The 420 Times based in Burbank, just north of Los Angeles, which reported that 10,000 people gathered in the University of Colorado last year to smoke.

This year a Non-Governmental Organization called NORML, which promotes the legalization of marijuana, organized an event in Orange County, south of Los Angeles, as well as other private parties and promotional offers.

California is wrestling with how to clamp down on retailers — who often call themselves medical marijuana dispensaries, citing the powerful pain-killing effect for cancer sufferers among others — especially near schools.

“There are some people that want to keep it just medical and there are people who say actually recreational smoking is medical to begin with anyway,” said Brian. “They have a point,” he added.