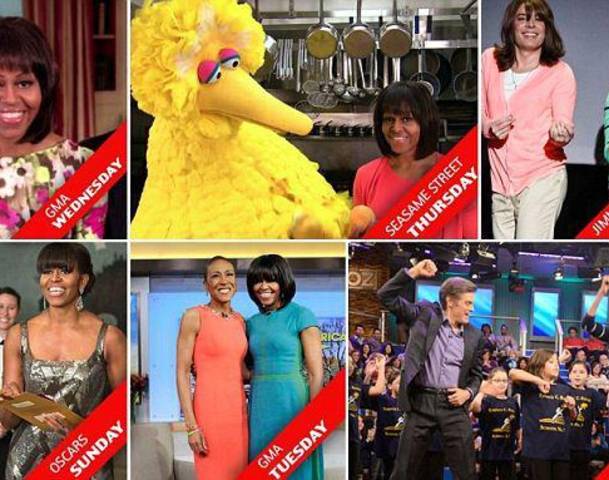 Michelle Obama’s whirlwind tour which started last week, has conservative critics labeling her a wannabe celebrity. No disrespect meant to our beautiful first lady for I think she is phenomenal—but she did seem to be on every television screen.

The appearance that has the right-winged media in a tizzy is her video pop-up at the Oscars Sunday to present Best Picture winner. Conservative Pundits pounced on this one immediately saying it was beneath the position of the first lady to attend such Hollywood affairs.

Many, including Breitbart.com slapped on the criticism, saying harshly, “Her Deus ex machina moment was just obscene, and rather frightening in what it suggests about how low we have fallen as a nation. Healthy societies do not create political personal cults.” Wow! Yes Mrs. Obama may have overdone the traveling a tad but “political cults” “obscene,” “frightening” and “how low we have fallen” are extremely bloated statements even for those wearing permanent techno-color glasses that sees everything to do with the Obamas through distorted prisms. And Breitbart tops that list.

Of course Fox News had to weigh in for it wouldn’t be a conservative anti-Obama slam-fest without them. Todd Starnes, one of their radio talking heads said, Mrs. Obama thought she had the right to “upstage” the Oscars. While Washington Post conservative columnist Jennifer Rubin complained to NBC about the first lady acting like a celebrity, saying, “There is a sense of going too far and too much and becoming so ubiquitous that people don’t consider you something special.”

So I guess if she stays at the White House and has bridge parties or knits lovely sweaters for her family and the White House staff, she will be considered “something special?” I think they’re forgetting this is a first lady with a difference. She is vibrant, energetic, and athletic and doing sedate things is not her forte. In fact the entire presidency is “something special and different” and the nitpicking has taken on a deeply special tinge like never before.

The first lady also stopped by the Doctor Oz Show, then visited with Jimmy Fallon to promote her anti-obesity campaign. Fallon even dressed in drag to do a festive dance routine with Mrs. Obama. Two Sesame Street PSAs were aired on Fallon so I think the FLOTUS may have hungout with the furry and feathery gang at that famous Street.Whom I’m sure thanked her profusely—for if the other guy had won the election and not her hubby Barack—Big Bird and all his neighbors would have been in the long unemployment lines right about now. Remember Mitt Romney had promised to cut funding for Public Broadcasting Service?

The president was included in the criticism when he joined the first lady via video on Feb.20 to give a warm welcome back to GMA co-host Robin Roberts.Its heared that Mrs. Obama’s next stop is Live with Kelly Ripa and her new co-host Michael Strahan March 4, which is dedicated to “first lady Day.”