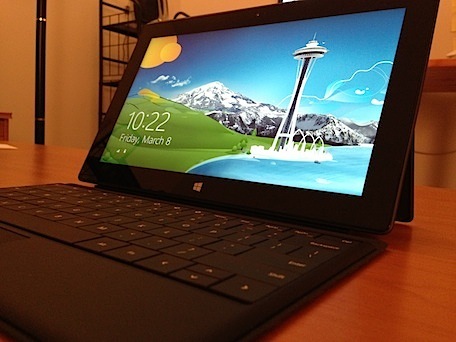 Also remember this is just the start. The Pro should evolve to the point where you can have a 1.5 or 2 pound tablet with all-day (at least) battery life — and still get all of the performance of a mainstream Windows 8 laptop. And that’s the deal-closer for me. It’s fast. Don’t believe me? Check out these benchmarks.

“Surface Pro is easily the fastest tablet on the market today,” Anandtech said. The basic point being that Intel’s Ivy Bridge silicon crushes Apple’s A6X-based iPad and ARM-based Android tablets in most benchmarks. And it’s not just numbers — you feel it. Everything pops and there’s almost none of the lag you invariably run into with other tablets.

I know this because I’ve been using the Pro and its speed is addictive — despite the comparative heft and shorter battery life compared with other tablets (though I wouldn’t call 2 pounds “heavy” and battery life isn’t as bad as reviewers make it out to be if you tweak Windows 8 settings). Then there’s the design. After the Pro, it’s hard to go back to the old clamshell paradigm (which, in my case, is a Dell Adamo).

I’ve said this before, but relocating the electronics behind the screen changes everything. That includes relegating the keyboard — something reviewers over the decades have spilled untold oceans of ink evaluating because of its importance — to second fiddle. The touch display rules.

Which brings us to a sticky area for the Pro. I’m guessing that traditional consumers of PCs who are trying to make the leap from laptop to tablet will want more keyboard options directly from Microsoft. And bundled at lower prices. I use the touch cover and it’s fine, though it could use a larger touch pad. But, again, Microsoft should come up with another keyboard option (as a Surface-specific accessory) that makes the transition less painful for consumers who still demand a killer keyboard-touch pad.