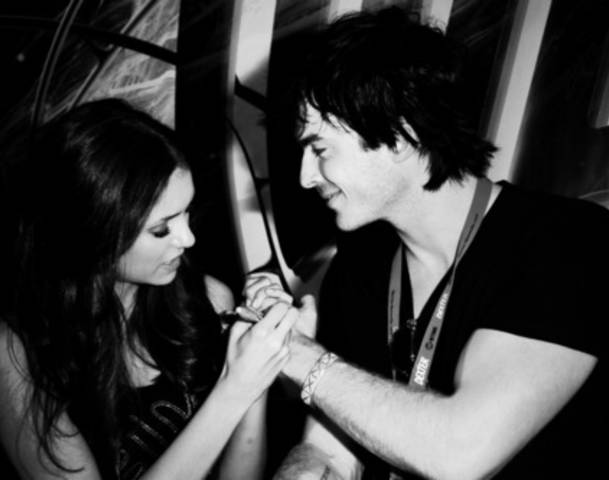 Nina Dobrev and Ian Somerhalder flew from Atlanta, Georgia to Los Angeles last week to attend Oscar festivities. The Vampire Diaries actors and rumored boyfriend/girlfriend arrived at LAX together on February 24th but were not photographed together. The two split off and left the airport separately.

On February 25th, Somerhalder attended the Independent Spirit Awards without Dobrev. The show was hosted by Seth Rogan and aired on IFC. Somerhalder tweeted about bringing a Go Green generator to Elton John’s Oscar viewing party on February 26th, “Really excited to see our GO GREEN MOBILE POWER generator at the Elton John Oscar viewing party- See you in a bit my little baby gennie:)” He then posted a photo with the generator. Somerhalder and Dobrev attended the Elton John AIDS Foundation Academy Awards viewing party together last night. They walked the white carpet separately causing reporters to bombard the two with relationship questions. One reporter asked if Somerhalder was embarrassed about the questions and he said “definitely not”.

Not only were Dobrev and Somerhalder in attendance but their Vampire Diaries co-stars Kat Graham, Torrey DeVitto and Paul Wesley were also at the viewing party.