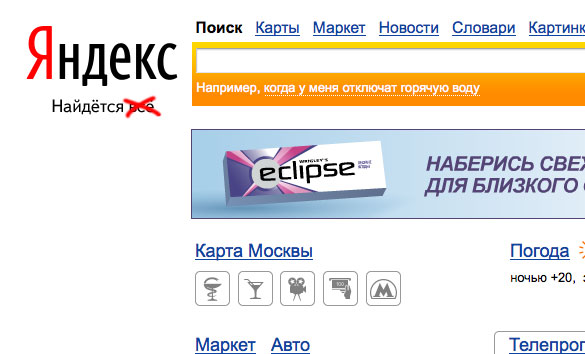 Russian search engine Yandex blanked out part of its logo to protest against the law. Yandex also crossed out the word “everything” in its “everything will be found” logo.

Russia’s parliament has voted to approve a law that would give the government the power to force certain internet sites offline without a trial.

Supporters of the amendment to the Act for Information say it will help the authorities block sites containing images of child abuse and other illegal material. But opponents have warned that censorship could later be extended.

The bill still needs to be signed by President Vladimir Putin to become law.

It must also be approved by Russia’s upper house, the Federation Council of Russia. Local reports suggest it could come into force by November.

The Russian-language version of Wikipedia took its content offline for a day ahead of the vote claiming:

” The law could lead to the creation of extra-judicial censorship of the entire internet in Russia, including banning access to Wikipedia in the Russian language.”

The blacklist is now restricted to sites offering details about how to commit suicide, material that might encourage users to take drugs, images featuring the sexual abuse of children, and pages that solicit children for pornography.If the websites themselves cannot be shut down, internet service providers and web hosting companies can be forced to block access to the offending material.

“People’s basic rights and freedoms must be upheld, including the right to information on the one hand and the right to be protected against harmful content on the other hand”.

But critics have complained that once internet providers have been forced to start blocking certain sites, the government may seek court orders to expand the blacklist.