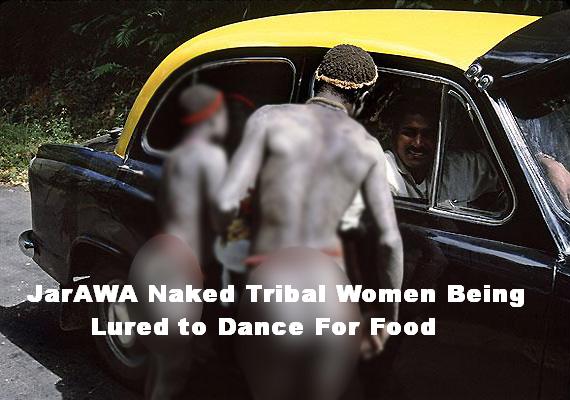 A shocking piece of news has emanated from the Andaman and Nicobar Islands which has now caused quite a furor in India. The native Jarawa tribal women here are alleged to be lured to dance bare chested in front of tourists, in return for food informs a leading British newspaper. UK’s ‘The Observer’ has released an video footage which shows the tribal women being lured to dance naked waist upwards for the tourist’s amusement by police officers after bribes are allegedly paid to them by the visitors. In the amateur video taken by a tourist, an off-camera police officer is heard urging the Jarawa women to dance. He is heard saying….”Dance ….. Dance for me.” He is even heard saying “I gave you food.” According to one report, he was allegedly paid a 200 pound bribe by rich tourists to entice the women tribals to dance.

Meanwhile, seeing the furor in the media and everywhere in India, the Indian Home Ministry has woken up to this alarming news. It has now demanded a status report on the Andaman tribes in 24 hours from local administration. Terming the incident “obnoxious and disgusting,” K P Singh Deo, Tribal Affairs Minister said “I’ve read the report in the newspapers, what I saw in the clips was disgusting. I’ve asked for a report and will certainly take action on it.”

Gethin Chambarlain ‘The Observer’ journalist has debunked the DGP’s claim saying the video was in-fact recent. He even gave the amount paid as bribe to the police. He said it cost the tourists’ Rs.15,000. “Six months back, a police officer was disciplined for doing so,” claimed Chambarlain.