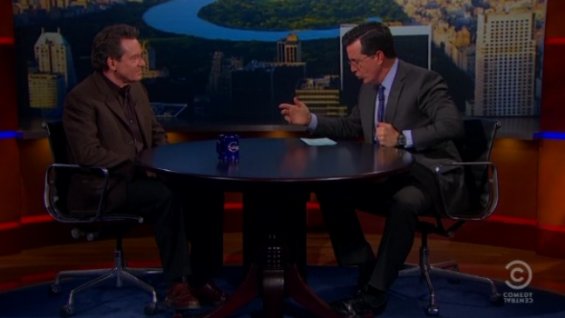 Stephen Colbert had some trepidation about welcoming to his show Lawrence Wright, author of the new book Going Clear: Scientology, Hollywood, and the Prison of Belief.

“If their [the Church of Scientology] lawyers are as litigious as they say, my new book could be called Going Broke,” the Comedy Central host joked on Wednesday’s The Colbert Report. (The book contains portions critical of Scientology.)

Ahead of the interview, Colbert said he normally doesn’t trust religions outside of his Catholicism but began to rethink that after seeing Scientology’s Super Bowl ad.

“That’s the religious big time. I don’t know how the Catholic Church is going to compete,” Colbert said. “The Pope is going to have to get some Clydesdales.”

Colbert said his show asked Miscavige for comment and received in response a watermelon stabbed with a knife and featuring a Post-It note reading “You.”

When Wright came out for his interview, Colbert asked him about the author’s allegations of abuse within the church. Wright claimed he’d interviewed 12 people who said they had suffered physical abuse while in the church.

“Wow, if I heard the Catholic Church had abused 12 people, I’d be out of there,” Colbert said.

Colbert said as a celebrity, one thing he admired about Scientology was the “great things” it had done for celebrities. “Tom Cruise has not aged,” Colbert said before asking if he should join the church.

Wright said the climate has changed since celebrities such as Cruise joined, opining that today “it’s the most stigmatized religion in the country” and would cause public relations problems for Colbert should he join.