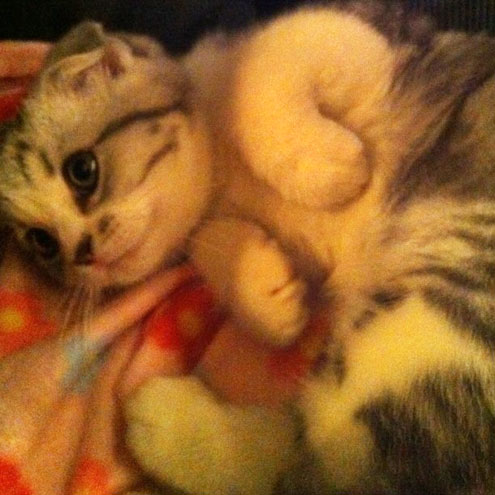 Taylor Swift the singer gives her recently adopted kitten a quick lesson on the Academy of Country Music Awards and how she’s nominated for Entertainer of the Year, Female Vocalist of the Year and Video of the Year.

“So you’re new here, so you don’t really know this yet, but this is coming up on a really amazing thing that happens every year—the ACMs,” Swift tells Meredith. “You don’t know how this goes, but I thought I’d explain it to you.”

Swift proceeds to say that the ACMs are “fan voted” and that folks can vote for their favorite artists once a day.

“So, like, we got nominated for Entertainer of the Year, which is huge and wonderful…Do you think that people should go and vote for us? Maybe?” Swift asks her furry friend.

Naturally, Meredith replies with the sweetest of meows. Which, of course, translates to “Yeah!”