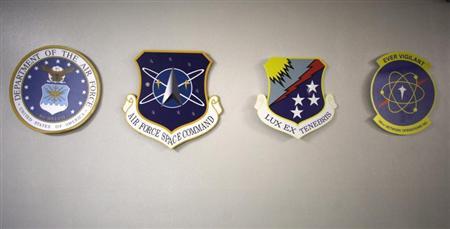 The U.S. Air Force has designated six cyber tools as weapons, which should help the programs compete for increasingly scarce dollars in the Pentagon budget, an Air Force official said on Monday. Lieutenant General John Hyten, vice commander of Air Force Space Command, which oversees satellite and cyberspace operation, said the new designations would help normalize military cyber operations as the U.S. military works to keep up with rapidly changing threats in the newest theater of war.

“This means that the game-changing capability that cyber is is going to get more attention and the recognition that it deserves,” Hyten told a cyber conference held in conjunction with the National Space Syposium in Colorado Springs. Hyten’s remarks came a month after U.S. intelligence officials warned that cyber attacks have supplanted terrorism as the top threat to the country. Spending on cyber security programs has gone up in recent years, but may face pressure given mandatory across-the-board cuts to the Pentagon’s planned spending on military equipment, programs and staff.

Hyten said the recent decision by Air Force Chief of Staff General Mark Welsh to designate certain cyber tools as weapons would help ensure funding. “It’s very, very hard to compete for resources … You have to be able to make that case,” he said. Hyten said the Air Force is also working to better integrate cyber capabilities with other weapons. He gave no details on the new cyber weapons, but the Pentagon has become more open over the past year about its work to develop offensive cyber capabilities in the face of escalating cyber attacks by China, Russia, Iran and others.

The United States and Israel are widely believed to have developed the Stuxnet computer virus that was used to attack an Iranian uranium enrichment facility, the first publicly known example of a virus being used to attack industrial machinery. Hyten said the Air Force planned to expand its cyber workforce of about 6,000 by 1,200 people, including 900 military personnel.

He said it took the Air Force decades to explain the central importance of space-based assets for warfare, but did not have time to wait with cybersecurity. “We have to do this quickly. We cannot wait. If we just let decades go by, the threat will pass us screaming by,” he said.

Hyten said the Air Force was trying to leverage investment in cybersecurity already being made by private industry, but still had work ahead to improve its interface with the companies that operate the largest computer servers, and any agreements would have to benefit both sides.