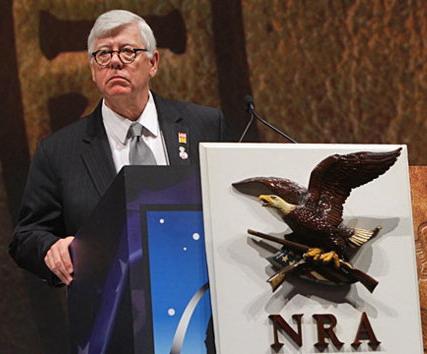 NRA President David Keene says that gun right activists strongly oppose Obama’s proposal to curb gun violence and they are actively preparing for a battle with the White House and Congress over the newly announced measures.

On Wednesday, President Barack Obama announced plans to implement his proposal package with the help of Congress. The package includes a ban on new assault weapons, limits on high-capacity magazines and expanded criminal background checks to include all gun sales. The proposal aims to fill in the loopholes that have so far allowed buyers to avoid checks by buying weapons at gun shows or through private sellers.

However, Keene strongly criticized the president following his announcement, which he made while surrounded by four children from around the country. He said that Obama has used kids to advance his agenda and expressed doubts that just a few legislative measures will be able to pass.

“It’s going to be very tough for the president to accomplish some of these things, but that doesn’t mean he can’t do it if he really turns it on,” Keene told ABC.

“All bets are off when a president really wants to go to war with you,” he said. “We’re gonna be there and we’re gonna fight it.”

The NRA president also defended its newly launched ad for its ‘Stand and Fight’ advocacy campaign which criticized Obama, calling him an ‘elitist hypocrite’ for sending his daughters to private schools with armed guards and asking why can’t other American children have the same kind of protection the first daughters enjoy.

Defending the ad, Keene said: “We were not talking about the president’s kids. We were talking about an elite class who criticizes others in their desire to be safe while making sure that they and their families and their children are always protected.

“We’re not talking about the Secret Service protection the president’s children enjoy – they ought to have that wherever they go,” he added.

The NRA president highlighted some areas where both sides can find common grounds for curbing gun violence and preventing tragedies similar to the Newtown shooting. Keene noted that such areas include beefed up resources for mental health care, better background check data and increased presence of school resource officers (police) at public schools. However, he called those steps ‘simply a fig leaf’ so the president can go ahead and pursue his anti-gun agenda.