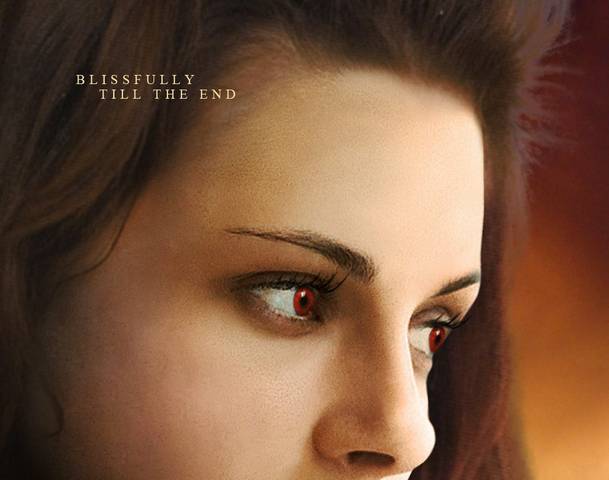 A new fan made Breaking Dawn Part 2 poster was posted on Tumblr by a Twilight fan over the weekend. The poster is a close-up of Kristen StewartKristen Stewart as a vampiric Bella SwanBella Swan.

The Twilight Saga posters have been known to be very un-creative and sometimes down right tacky. Anyone remember the original Twilight poster of Kristen Stewart and Robert Pattinson.  Most of the movie posters from the Twilight Saga besides the first one feature Stewart, Pattinson and Taylor Lautner standing in awkward poses and usually in a protective stance over Stewart.

The fan made Breaking Dawn Part 2 poster gives a breath of fresh air to the mundane Twilight Saga posters of the past. The poster artist’s name is NikolaNikola and sometimes goes by Nickart.  So far on Tumblr, Nikola’s poster has had over 1,500 likes and re-blogs. Hopefully studios take notice how much amazing potential there is in making a good movie poster.

Breaking Dawn Part 2 will premiere in movie theatres in November. It will be the conclusion to the Twilight Saga. In the movie, Stewart’s Bella Swan awakens as a vampire and finds out later in the movie that The Volturi is set out to start a war with her family, The Cullen’s.