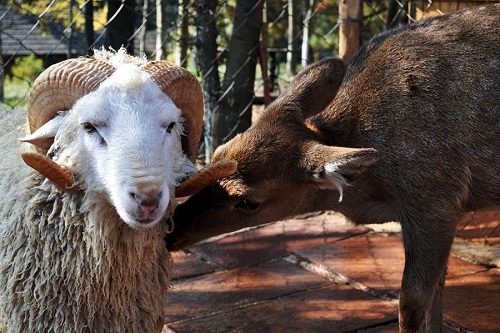 The Ram is called Changmao meaning long hair in Chinese, whereas the doe is called Chunzi which means pure. Their unusual pairing has made them very popular among the masses there.

The Yunnan Provincial Wildlife Park in Kunming city is all set to even issue tickets for this unconventional event of Ram and Deer Wedding. At least 500 tickets at 66 yuan – $10; £6.60 will be issued on the interspecies “wedding” which falls on Valentine’s Day (14th Feb, 2012).

The animals will be attired in “wedding clothes,” reports China Daily. The animals had been reared together along with sheep and spotted deer since 2009 as they were all herbivorous, informs to zoo attendant Liu. As time passed, Chunzi, who is one year elder to Changmao grew very affectionate towards each other. She would often lick the ram’s long hair and even the ram became possessive. He would attack any male deer if it tried to come near Chunzi. By the time both were adults they would be mating regularly.

Despite his affection Changmao was not exactly loyal to Chunzi. He sired a baby lamb with the only female sheep in the zoo. It was then that the zoo officials took a decision to separate the Ram and Doe couple. Liu informed “They are not from the same species after all, so we separated them in November 2011.”

But the zoo authorities had to eventually reunite the two. They found that whenever they put Changmao with his baby and its mother, he would become aggressive. Chunzi would also behave like a jealous lover and would squeeze through the fence to be in his company.

A regular visitor to the zoo Xinmei said “Seeing as they are so intimate, they have my blessing.” The unusual duo’s story was within the zoo precincts only, however they soon became famous after a local television station beamed a report about their relationship.

While the Ram and Deer are to tie the knot (so to speak) tomorrow, Xu Linmu, an animal researcher and professor from the wildlife park, says that this cross species union is unlikely to produce any off-spring.

Meanwhile Wang Dajun, a conservation biology researcher with Peking University is cautioning the public not to attach too much human feeling into the pair’s behavior as they do not appreciate them as human beings do. “Leaving them alone is the best choice,” he advises succinctly.

Well, after the ‘wedding’ tomorrow it will be interesting to watch and know how long this marriage will eventually last.